A-Z of the Accused: Margaret Ellnore

Accusations: Francis Hutchinson recorded in his Historical Essay Concerning Witchcraft that when a man named Rudge refused to let Margaret Ellnore a house, his wife fell ill soon afterwards and Margaret was blamed. The woman remained unwell for three years, only improving during the periods when Margaret was arrested and chained up; as soon as Margaret was released, Mistress Rudge once again fell ill. Further accusations were made against her by others, who said they had fallen ill after likewise quarelling with Margaret. To make matters worse, it was said that Margaret's Grandmother and aunt had previously been hanged for witches, (the grandmother having passed her own imps on to her children) something that made her guilt all the more believable as witchcraft was known to run in families.


Outcome: One of the later witchcraft trials to take place in England, Margaret Ellnore had the good luck to be tried by Sir John Holt, a judge who was responsible for acquitting several accused witches during his career and had a reputation for leniency where this particular crime was concerned. Margaret was accordingly found innocent of the crimes of which she was accused. It seems that Holt's leniency only bought Margaret a few more years; a burial record for Maragret Elmore in Ipswich suggests she died in 1697.
Posted by WillowWinsham at 12:25 No comments:

Email ThisBlogThis!Share to TwitterShare to FacebookShare to Pinterest
Labels: 17th Century, A-Z of the Accused, Suffolk

A-Z of the Accused: Agnes Duke

Accusations: Agnes' first official step on the wrong side of the law was not actually for witchcraft. At the Brentwood Assizes on 14 March 1566, she was indicted along with William Spayne on the charge of burglary;  on 15 December the previous year, the pair had stolen goods from the house of Richard Harris in Agnes' native Hatfield Peverel in Essex. Agnes was found guilty, but was remanded, possibly because she pleaded pregnancy. Her accomplice wasn't as fortunate; Spayne is recorded as having died in prison, a common occurrence given the unsanitary conditions prisoners were frequently held in.

Agnes was still in prison in March 1567, but was apparently released some time after that, as the next mention of her is not until the Chelmsford Assizes of 1584 when she was again before the courts, this time indicted for murder by witchcraft. It was said that on 7 February 1584 she bewitched John Byrde, who died 25 that same month. Agnes was found not guilty and, again, released. Finally on 13 March 1589 Agnes was again up for charges of witchcraft at Chelmsford, this time working with John Heare to bewitch Joan Hawkins in November 1588, their victim languishing until 10 March the following year. Agnes was again, surprisingly, found not guilty.

Outcome: Despite being cleared and escaping the noose, Agnes was still listed as a gaol prisoner at the February Chelmsford sessions in 1590. The end result for Agnes is ultimately unknown as mention of her dries up in the Assize records for the period; one might hope she was released, although death in prison was, potentially, more likely.
Posted by WillowWinsham at 01:55 No comments:

Email ThisBlogThis!Share to TwitterShare to FacebookShare to Pinterest
Labels: 16th Century, A-Z of the Accused, Essex

A-Z of the Accused: Joan Cason

Accusations: When Sarah Cooke's young daughter fell ill, a traveller told her that the girl had been bewitched. To cure her, the worried mother was advised to procure a roof tile from the house of the woman she suspected was responsible: Joan Cason. Sarah was to place the tile in the fire, where it would 'sparkle and fly round the cradle' if the child was indeed bewitched. Sarah Cooke duly carried out the ritual using a tile from the roof of Joan's house, and the result proved positive. To further compound her guilt in the eyes of her neighbours, Joan herself came to the Cooke's house not long afterwards to see how the child did, with disasterous consequences: four hours after looking Joan in the face, young Jane Cooke was dead. Although Joan denied any culpability it did her little good; seven people vouched for the fact that several years ago a rat-like spirit used to visit Joan's house to aid her in her mischief. Despite Joan insisting that those who spoke against her did so out of malice, she was arrested and charged.


Outcome: Joan was indicted on the charge of invoking spirits and also of bewitching young Jane Cooke to death. She was acquitted of the murder charge however and only charged with the conjuring of spirits, after she admitted that the rat-like creature had indeed been a frequent visitor to her own house and others in Faversham. This 'leniency' was due, according to the account in Holinshed, to the jury being reluctant to convict Joan of a crime punishable by death. It seems, however, that their consideration was actually Joan's downfall; a lawyer who was present quibbled the matter of conjuring spirits, and Joan was hanged anyway three days later.
Posted by WillowWinsham at 00:34 No comments:

Email ThisBlogThis!Share to TwitterShare to FacebookShare to Pinterest
Labels: 16th Century, A-Z of the Accused, Kent

A-Z of the Accused: Jane Brooks

Accusations: The elderly Jane, along with her sister, was accused of tormenting young Richard Jones. Jane had begged bread from him, and in return had given the boy an apple; after taking a bite from it he had suffered a fit and could not move or speak. Jane and her sister were said to then have continued to torment the boy, visiting him in spectral form; on one momentous occasion the apparition was stabbed in the hand by one of Richard's relations, only for the same injury to be discovered on Jane herself shortly afterwards.

The boy continued to suffer strange fits and was seen to be in great agony, and matters continuing to escalate, despite rumours that the sisters had offered Richard money to drop the case against them. Most memorably, it was claimed by witnesses that on 25 February 1658 Richard Jones was lifted into the air by an invisible force and transported for three hundred yards – a journey that included clearing a stone wall – after which he was thrown to the ground with such force that he lost consciousness. Jones claimed upon waking that Jane had been responsible and had lifted him into the air – no mean feat for an elderly and frail woman. On another occasion, Richard was discovered floating up by the ceiling of his house, remaining there for quarter of an hour much to the amazement of the several witnesses who saw him.

Outcome: Jane and her sister were sent to the Shepton Mallet House of Correction before being tried at the Chard Assizes in March, 1658. The pair were sent to gaol on 10th March, from which point Richard Jones ceased to suffer further fits. This did not save Jane however, and she was executed on 26th of March, while her sister died in prison.

Posted by WillowWinsham at 11:04 No comments:

Email ThisBlogThis!Share to TwitterShare to FacebookShare to Pinterest
Labels: 17th Century, A-Z of the Accused, Somerset

Wishing everyone a very happy start to 2018, and hoping that the festive period was a positive one, however you chose to spend it! I'm back blogging with tales of witches and everything weird and wonderful, and what better way to start than with some new year's accusations of witchcraft?

Agnes and her husband John Godfrey were married 25th January, 1578 at St. Andrew's, Enfield, and had at least six children in the years that followed. There is no evidence one way or another as to how their marriage fared, but relations within the local community were certainly less than harmonious as Agnes was accused of bewitching Thomas Phillippes, a one-year old infant, on 1st January, 1596/7, and another child, William Harvey, on 1st January 1597/98. Both died. In November 1609, Agnes was indicted for both crimes. She was also charged with bewitching a 'steer' (castrated cow), a pig, a 'little pig' and a mare belonging to local gentleman William Durrant, bewitching Frances Baker and causing her illness and wasting, and causing the death of Jasper Tappes. Agnes pleaded 'not guilty' to all charges, but was found guilty of killing William Durrant's animals and also murdering Thomas Phillippes in 1596/7.

The sentence passed against Agnes is unknown, but she clearly escaped the noose as she was indicted again several years later in 1621 on more charges of witchcraft. The previous enmity between Agnes and William Durrant had not been resolved, as this time she was accused of harming the man himself, causing his body to be wasted. Agnes was also accused of using witchcraft to murder William and Robert Coxe and Henry Butterfield in the years since her previous indictments.

Agnes pleaded 'not guilty' again and was this time acquitted on all counts. This was hopefully the end of at least official accusations for witchcraft for Agnes, as she does not appear in the court records again for any reason.

(As I can't let these things lie, I am currently pursuing research to find out how long Agnes lived after her acquittal. Watch this space!)
Posted by WillowWinsham at 13:08 No comments:

A-Z of the Accused: Anne Ashby

Accusations: Anne, a spinster, was accused of bewitching the three year old daughter of Richard Wilding to death, and another infant on 4th December the year before. She was also accused along with four other women of bewitching Elizabeth Osborne on 19th April, 1652, causing her to languish until she died on 15th July that same year. Anne was named as the main 'actress' in the drama that unfolded, and not only confessed to the crimes she was charged with, but also to having let the Devil have carnal knowledge of her.

Anne appeared to be possessed by a spirit named Rug and to have control over said spirit; she was observed to fall into 'an ecstacy' whilst in court, and when she recovered informed those present that 'the spirit Rug came out of her mouth like a mouse.' According to Anne, the Devil had given the women a piece of flesh and told them that if they touched it they would get whatever they wanted. She also revealed the location of this grisly object, 'of a sinewy substance and scorched,' and, if the account be believed, it was discovered in the place she named. Anne, along with two others of the accused, pleaded pregnancy in an attempt to avoid their fate.

Outcome: Three of the women were reprieved, but Anne was found guilty at the Maidstone Assizes on Friday 30th July 1652 and hanged not long afterwards.

Further details of the case are related in the pamphlet A Prodigious and Tragical History of the Arraignment, Trial, Confession and Condemnation of six Witches at Maidstone, in Kent', printed in London, August 1652.

Posted by WillowWinsham at 21:00 No comments:

Email ThisBlogThis!Share to TwitterShare to FacebookShare to Pinterest
Labels: 17th Century, A-Z of the Accused, Kent

A-Z of the Accused

As anyone keeping an eye on my Twitter feed will already know, I've been busy enjoying the challenges of a new addition to the family for the last few months, which has left little time for blogging and all that goes with it. To get back into the swing of things I've decided to have a bit of fun: a set of posts working through the alphabet, each looking at a different accused witch.

To start with I'll be focusing on English witches; can I find one for each letter? Watch out for a new post each Monday and keep up with previous witches below. 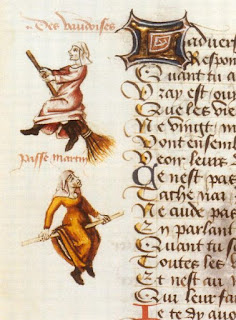 Posted by WillowWinsham at 20:00 No comments: